Christmas Trail at the Iosas Centre Donegal – A Wallace Media news feature on the Iosas Centre Christmas Trail, a memorable interactive Christmas experience for all the family. Each little house in the garden will have its own Christmas theme and in the tradition of the great Irish storytellers, will have characters telling the Christian stories behind some of our favourite Christmas traditions – St Nicholas the Giver of Gifts, the Candy Cane, the first Christmas and more. Filmed/Edited & Produced by Shane Wallace. Narration by Shaun Doherty

The garden is inspired by the 5th – 12th Century spiritual renaissance in Europe, which followed the fall of the Roman Empire. The Garden with its representations of the Cross of Patrick, the Boat of Brendan, the Island of Columba and the Oratory of Canice,inspires visitors to a spiritual re-awakening and renewal following the recent Troubles in this land. Also, a rough pathway round the perimeter of the Garden affords Christian Pilgrims ample opportunity for reflective prayer.

The Celtic Prayer Garden is a six-acre site laid out in the shape of the island of Ireland which depicts the lives of the major saints of Ireland’s Golden Age (5th to 12th Century). Individuals and groups can tour the garden, enjoy its wonderful peace and natural beauty and learn more about our common Celtic Christian heritage. It is a place of incredible peace and natural beauty which affords the pilgrim time and space away from today’s hectic pace of life.

LMedia is run by a group of four creative young people who will get digital media working for you and your business. The team know how social media impacts on all aspects of our lives today. They have grown up with it and know what works …. and what doesn’t.

Social Media
LMedia can get your message and brand out there effectively and consistently.

Web Design
We design, host, optimize and manage effective websites and integrate it with your social media networks

Inishowen Evictions – The new RTÉ television series ‘The Lost Village’ is looking for anyone with information pertaining to the 13 families evicted from their homes in the small Donegal village of Carrowmenagh, in 1881.

Big Mountain Productions are seeking out this information as part of a four-part bi-lingual series “The Lost Village”. The series will be aired on Ireland’s national broadcaster, RTE, during Seachtain na Gaeilge in March 2013.

In 1881 thirteen families were evicted from their homes in a small village on the Inishowen peninsula in Donegal called Carrowmenagh. It was a sight that was all too common in the Ireland of the 1800’s.

In this series will trace the ancestors of the evicted and return them to Inishowen and the life of their ancestors at that time. Through the story of Carrowmenagh we tell the wider story of evictions in Ireland.

We are looking for people/a family with a direct connection to Carrowmenagh or other evictions to take part.

You must be able to fulfil the below criteria:

We are seeking a family to take part, and if possible across three generations. You would need to be prepared to stay in a traditional house for three nights to get a taste for life as it was in the time of your ancestors.

Big Mountain Productions have previously brought ‘The Tenements’ to TV3 in Ireland and ‘The Genaeology Roadshow’ to RTÉ in Ireland.

Every aspect of the area from history to geology, poetry to placenames, anecdotes and memories are on offer in what is the most comprehensive walking app of its kind anywhere in the world. Offered by navigatour™ guided apps from Headland New Media, audio, video, text and pictures showcase the celebrated way-marked way in northwest Ireland. See www.navigatour.ie for more.

Between Donegal Town and Ardara, enjoy the host of stories and history that make this place so special; a region whose people survived on their knowledge of the elements without modern equipment, an area that drew a Harvard Professor-turned sheep farmer into its bosom for 14 years, that was the inspiration for Brian Friel’s ‘Ballybeg’ and a heritage town that has more festivals than just about anywhere else.

Follow in the footsteps of mythological characters Diarmuid and Grainne, of Fionn and the Fianna, hear about ghosts, fairies and pookas, of customs and piseogs, fairdays and feastdays and of the finest view atop on the mountains, looking down as far as Cavan and Mayo and up as far as the Derryveagh mountains.

This is a very special journey and we hope you take a few days out to ensure you get to enjoy its beauty and its people in full for hopefully safe walking, good weather and an abundance of happy memories.

Scoil Mhuire Buncrana Gangham Style- Here are the students and teachers from Scoil Mhuire, Buncrana, Co. Donegal with one of the first whole school Lip Dubs in the Republic of Ireland. 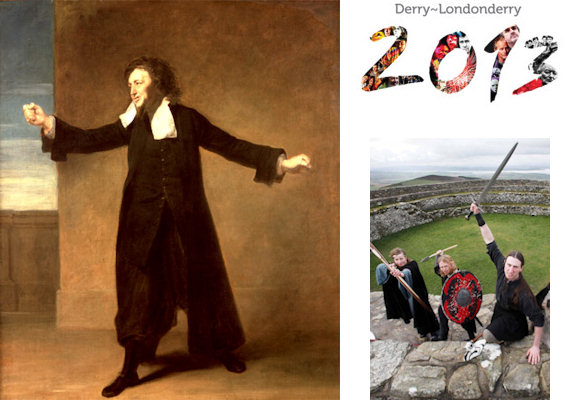 Inishowen Events for City of Culture

Inishowen Events for City of Culture – What has been described as the most ambitious and varied programme of arts and culture ever assembled on the island of Ireland was launched in Derry last week as the city prepares to host the UK City of Culture in 2013. Two of Inishowen’s signature festivals, the Charles Macklin Festival and Féile Grianan Áiligh have been listed among the hundreds of events taking place in Derry next year, including the prestigious Turner Prize, a new commission by the London Symphony Orchestra, performances by the Royal Ballet and the All Ireland Fleadh, which will be staged in Northern Ireland for the first time.

The Charles Macklin Festival which will take place in October in Culdaff and Féile Grianan Áiligh which will be hosted at the summer solstice in mid June in Grianan Áiliagh Fort in Burt, were selected by the City of Culture Team as they represent the rich heritage and culture that is synonymous with Inishowen and Derry’s natural hinterland. Both events were also awarded financial support by City of Culture in recognition of their contribution to the overall City of Culture Offering.

We are thrilled that the Charles Macklin Festival and Féile Grianan Áiligh have been selected for the City of Culture Programme. It is testament of the high calibre of cultural entertainment each of these events offer and it is a great opportunity for Inishowen to be involved in what promises to be an incredible year for tourism

Representatives from both festivals attended the Programme Launch. Commenting on the inclusion of the Charles Macklin Festival, Committee Member, Anne McGrory said

We are delighted that the Charles Macklin Festival is to be designated as an official partner of the City of Culture celebrations in Derry. This new partnership is recognition of the great social and historical links between the city and the Inishowen peninsula. It is also a great opportunity to celebrate the rich literary traditions which are a further link between the Derry and Donegal