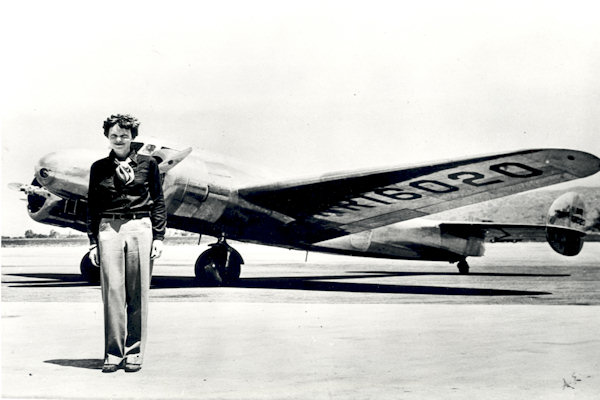 It is 80 years since Amelia Earhart touched down in a field at Ballyarnett on the Derry/Donegal border. She took off from Newfoundland in Canada in a bid to become the first woman to fly across the Atlantic.

Hoping to land in Paris, bad weather and technical problems altered her course and she landed in Derry. A week long festival was held in the city to mark the event with a fly past planned for Monday afternoon. A Donegal based flying club will stage a fly past in Guildhall Square at 15:00 BST. Six planes from Finn Valley flying club from Convoy are expected to take part.

I’m delighted Derry City Council have designated today as Amelia Earhart Day. This 80th anniversary is a stepping stone for our city to look at the legacy of our connection to this historical achievement. This is an endorsement of the significant and lasting place that Amelia Earhart holds in the history of our community.

But in 1937 her challenge to be the first woman to fly around the world ended in tragedy when her plane disappeared in the middle of the Pacific. For 17 days rescue teams scoured more than 250,000 square miles of ocean, but she was never found.

The aviator is a household name in America and an airport in Kansas was named in her honour. In March 2012, a similar bid to rename City of Derry Airport after the pioneering aviator was rejected after local politicians could not agree. That decision was criticised by the former director of a small museum celebrating Amelia Earhart in Derry. John Thompson said the failure to capitalise on Amelia Earhart’s legacy was a “major mistake”.