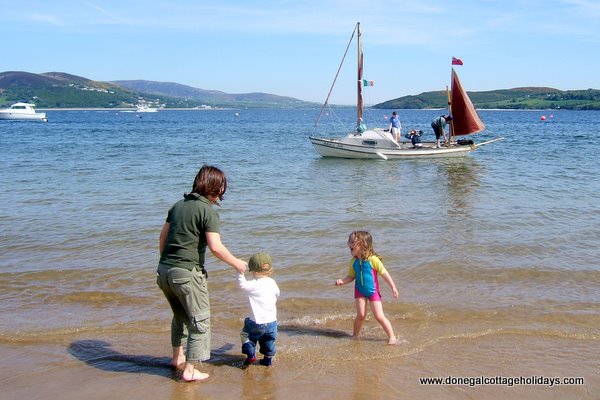 Donegal has the potential to be the Blue Flag capital of Ireland with more top internationally recognised beaches than any other county in Ireland.

The county currently has 12 Blue Flag beaches, and lies third in the league table behind Mayo and Kerry, who both have 13.

But Cllr. Liam Blaney believes that Donegal Co. Council should be making every effort to ensure that more beaches in Donegal get the official Blue Flag status.

He pointed out that Rathmullan has a 2 km long beach but had lost its Blue Flag status in 2003, due primarily to problems with water quality. However, the water quality has improved – and has been monitored – and is set to improve further with the completion of the Letterkenny wastewater treatment works at Magherenennan. He added that Rathmullan also has the infrastructure required with toilets, lifeguards, beach management and parking. He contended that there would be little additional cost as water quality samples are already being monitored now.

Downings lost its Blue Flag a number of years ago due to problems on beach with traffic. Prior to this it has been a Blue Flag beach for four years, and he felt that not a lot would be needed to regain that status.

He also felt that Ballyheerin beach in Fanad could also meet the strict criteria.
Speaking at the monthly meeting of Donegal Co. Council in Lifford, Cllr. Blaney tabled a motion calling on the local authority to apply for blue flag status for more of the county’s beaches.
Several other councillors also spoke about the value of the Blue Flag awards and backed Cllr. Blaney’s call.

The Council’s Assistant Director of Water and Environment, Joe Poeples said that there was a marginal cost in “getting some locations over the line” but added that choices need to be made between competing demands.

A report on the matter will be brought back to a Strategic Policy Committee meeting in February.
Cllr. Blaney acknowledged the tight budgetary situation but felt that to have the highest number of blue flags in any county would be a great plus in promoting Donegal.