Donegal earthquake registers 2.2 on Richter scale. The epicentre of the quake is believed to be somewhere close to Glenvar on the Knockalla Coast Road. Residents living in Donegal were woken by a minor earthquake in the early hours of Thursday morning.

The British Geological Survey (BGS) confirmed an earthquake registering 2.2 on the Richter scale was registered in Buncrana at 01:04 GMT. The earthquake’s measured depth was 3km. 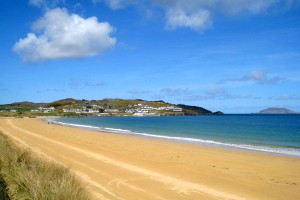 It happened almost exactly two years to the day since a similar sized tremor was felt. The BGS said it was a very small reading in terms of world earthquakes but for Ireland, which does not see much of this activity, it is not surprising it has caused an amount of alarm.

It received about nine calls with people claiming to have felt vibrations, whilst others compared it to thunder.

Julian Bukits, assistant seismologist with the BGS, said window frames shook and some people were woken up.

“It happens naturally in the north of Ireland but not as often, say, as northern Scotland or the south of Wales,” he said.

“No one can really explain it for Ireland, it’s just a geological phenomenon. Usually, with reports of this kind, people think it’s a heavy lorry going past their home.”

The BGS has narrowed the epicentre of the quake down to a few hundred yards around the Knockalla Heights coast road, about five miles across Lough Swilly from Buncrana.

People as far away as Letterkenny, Kilmacrennan and Ballybofey reported the rumblings, as well as more locally in Buncrana, Kerrykeel and Urris.

No damage has been reported.

The last similar-sized earthquake in Ireland was a 2.6 in north Clare in May 2010.

Mr Bukits said: “They are not very often and as far as earthquakes go, 2.2 is relatively insignificant.”

There have been eight minor earthquakes recorded in this region of Donegal.

Director of the Irish National Seismic Network Tom Blake said Donegal has some significant fault lines “coming all the way from Scotland”.

He assured that the faults were far removed from any major boundaries and were a normal reaction to the seismicity there.

“From time to time there is a little stress and strain that gets released and that is what we see as these minor tremors,” he said.

And What about the Northern Lights over Inishowen?