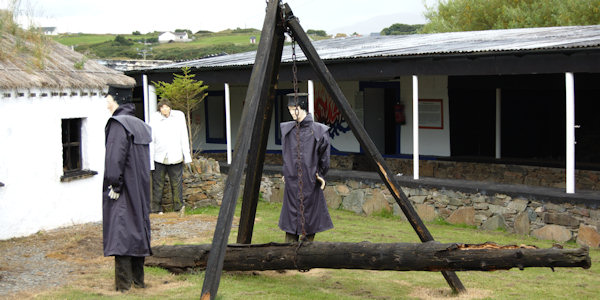 Inishowen Evictions – The new RTÉ television series ‘The Lost Village’ is looking for anyone with information pertaining to the 13 families evicted from their homes in the small Donegal village of Carrowmenagh, in 1881.

Big Mountain Productions are seeking out this information as part of a four-part bi-lingual series “The Lost Village”. The series will be aired on Ireland’s national broadcaster, RTE, during Seachtain na Gaeilge in March 2013.

In 1881 thirteen families were evicted from their homes in a small village on the Inishowen peninsula in Donegal called Carrowmenagh. It was a sight that was all too common in the Ireland of the 1800’s.

In this series will trace the ancestors of the evicted and return them to Inishowen and the life of their ancestors at that time. Through the story of Carrowmenagh we tell the wider story of evictions in Ireland.

We are looking for people/a family with a direct connection to Carrowmenagh or other evictions to take part.

You must be able to fulfil the below criteria:

We are seeking a family to take part, and if possible across three generations. You would need to be prepared to stay in a traditional house for three nights to get a taste for life as it was in the time of your ancestors.

Big Mountain Productions have previously brought ‘The Tenements’ to TV3 in Ireland and ‘The Genaeology Roadshow’ to RTÉ in Ireland.