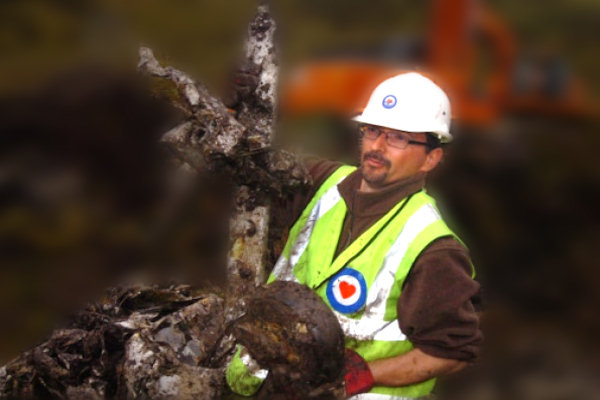 The remarkable story of the discovery of a World War II Spitfire in an Inishowen bog is to be published in early May 2012.

‘The Story of the Donegal Spitfire’, was penned by Claudy aviation historian, Jonny McNee, who discovered the fighter plane’s whereabouts after almost giving up hope. He also led the incredible excavation of the fighter, which was flown by an US pilot who joined the RAF, and the ambitious restoration project

Jonny’s new book tells of the ups and downs of tracing the last movements of the plane, pinpointing its exact location due to a chance conversation in an Inishowen shop, the ambitious year-long project to have it excavated and preserved and meeting with those closely associated with both the plane and the pilot.

The soft-back publication, which contains 130 pages including 12 pages of colour photographs, charts the story behind the discovery and excavation in 2011 of Spitfire serial number P8074 from 133 (Eagle) Squadron RAF.

During WW2, this squadron was based for a few months at RAF Eglinton. The story became known in the media as ‘The Donegal Spitfire’ and was the first licenced excavation of a WW2 aircraft anywhere on the island of Ireland.

The book also covers the fascinating career of its American pilot, Pilot Officer Roland ‘Bud’ Wolfe who abandoned his stricken aircraft in November 1941 which then nosedived and buried itself deep beneath the peat on the Glenshinny mountain, in the townland of Moneydarragh, near Gleneely village in Inishowen.

It recollects the joyous highs and stressful lows in obtaining the required archaeological licences and permissions for a project that had never been attempted before. The tale of the pilot’s internment in neutral Eire, followed by a short-lived escape back to his squadron at RAF Eglinton and his subsequent re–internment under the orders of the RAF immediately grabbed the public imagination.

The book also covers the wartime donation of this iconic fighter by successful Canadian businessman Garfield Weston and its incredible state of preservation. The firing of one of its recovered Browning machine guns – watched by over a million people on the BBC website – catapulted the P8074 story onto a global stage.

‘The Story of the Donegal Spitfire’ culminates in the emotional visit to Derry by the pilot’s two daughters and other members of the extended family to commemorate their father’s war time career and launch the museum exhibition of recovered items. The discovery and excavation of Spitfire P8074 was recorded as part of a BBC NI series entitled ‘Dig WW2’ presented by Dan Snow and filmed by Derry based 360 Production. The series is due to be broadcast next month.

This article was first published in the Derry Journal