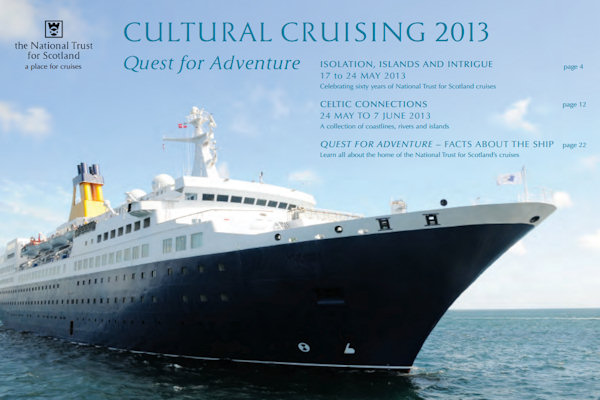 Inishowen has literally been put on the map following the news that the National Trust of Scotand are to include the Inishowen Peninsula in their cruise itinerary for next year. Each year the NTS charter a luxury cultural cruise which ferries thousands of tourists around some of the top sites in the British Isles, and with the sixieth anniversary of the now famous excursion approaching next year, the Trust have included Inishowen in the schedule for their diamond anniversary tour.

The Inishowen Peninsula, part of County Donegal, lies at the very north of Ireland and is one of the country’s hidden treasures. On the shore of Lough foyle, on the north-eastern extremity of the peninsula, is the small village of Greencastle where we will come ashore to explore this remote part of the country. The village is home to the Inishowen Maritime Museum and planetarium and is a great starting point for coastal walks. The peninsula coastline is dotted with sandy beaches, secluded coves, staggering cliffs and some of the most beautiful scenery in Ireland.

The northernmost tip of the peninsula, Malin head, is a Special Area of Conservation and an ideal location for bird-watching with its observatory and over 250 recorded species of bird, including the elusive corncrake.

Doagh Famine Village
The challenges that the area’s remoteness and isolation have caused residents from the time of the Irish potato famine to the present day can be discovered at the thatched village of Doagh, inhabited until 1983 but now an intriguing museum of life on the edge. While there is much to see in Inishowen itself, within easy reach is Northern Ireland and two of its unmissable sites: the walled city of Derry and the Giant’s Causeway. An overnight sail takes us across the Straits of Moyle to the Isle of Islay, Queen of the hebrides. With its human history start.

View full details at this link