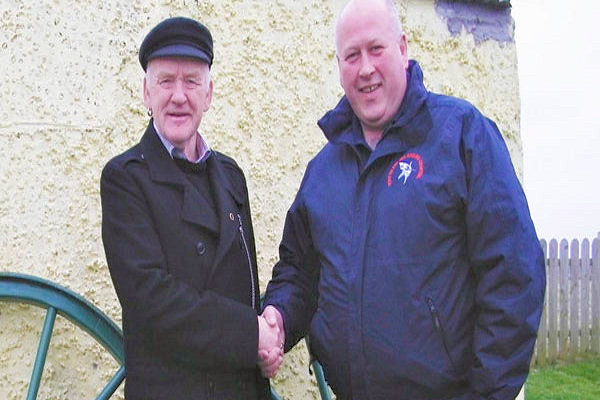 With the raw, regal beauty of majestic Errigal and Muckish mountains as panoramic backdrops, an enterprising West Donegal man has launched a unique tourism service on and around Tory Island.

Based on his years of experience with boats of all kinds, and having recently completed a ten-person house on the Republic’s most northerly island, Michael Curran, known locally as “Sabba,” is combining sea-fishing excursions, leisurely tours around the three-mile-long island and a relaxing break at his two-storey, sea-front house.

“There is so much unspoiled beauty around here, mountain, cliff, sea and shore, and such utter tranquility that it makes for a perfect getaway destination,” said the friendly man from nearby Gaobh Dobhair, a few miles from the island on the mainland, who has established “Tory Sea Angling Charters.”

Fishing aficionados are taken from a number of Donegal coastal locations – including Aranmore Island, Bunbeg harbor and Magheraroarty Pier – on his boat, “The Cricket,” a fully-equipped, Aquastar 38′ powered by a 250hp engine, with a top speed of 18 knots, and that carries 12 people and two crew members.
[shareaholic app=”share_buttons” id=”6462374″]

Sabba’s wealth of local knowledge means clients are guaranteed arrival at the best catch areas in this part of the Atlantic, especially as the boat’s license allows it to roam over a large, 20-mile area from Bunbeg. Cod, ling, hake, pollock, coalfish, conger eel and baskets of mackerel…you name it, you’ll probably catch it.

Then slowly grill or barbecue it later that same evening back on the veranda of “Teach Sabba” while enjoying a cold one listening to the soothing sounds of puffins, seagulls and cormorants while scanning the sea for pods of playful dolphins.

“Teach Sabba” is located on one of the finest spots on the island, close to spectacular cliff scenery, beside An Eochair Mhór (“The Big Key”), a long, steep-sided cliff spur ending in a crag called An Tor Mór (“The Big Rock”).

The spur has prominent rocky pinnacles known as “Balor’s Soldiers’ (Saighdiúirí Bhaloir) and gives the spur a toothed appearance, thus contributing to the name, “The Big Key.”

“You can’t be farther from noisy traffic and the stress of modern life than right here on the island, with the added convenience that the nearest restaurant and pub is but a short walk away,” said Sabba, gazing dreamily out from his front door at the clutch of seaweed-draped rocks below.

Aside from fishing, Sabba also offers guests relaxing tours around the entire island where they can enjoy panoramic views over the sheer, rocky cliffs at one end and across at the old lighthouse at the other, a place that is also the favored nesting site for Ireland’s rarest bird, one threatened globally with extinction – the Corncrake.

On the island, guests can enjoy varied activities. Hiking and biking from one part of the island to the other is easy for both young and old with no steep gradients to navigate, or dangers to avoid.

A stop in the middle reaps a well-deserved reward as lively Irish music is often played there in the lounge of the island’s sole hotel and where regular ceilis take place. You will no doubt also have the pleasure of meeting the island’s very own king, and conversationalist extraordinaire, 68-year-old Patsy Dan, who was been “Resident Royale” for many decades. Even his car has emblazoned along the front,”King of Tory.”

Tory island is also a haven for painters, with the striking light and gorgeous hues of the changing skies inspiring artists from all walks of life. One particularly prominent artist, Englishman Derek Hill, once lived here and started an informal school for local people that produced a genre known as “naïve art.”
Some of the school’s work, including that of King Patsy Dan, can be admired in a small art gallery (Dixon’s).

Endless stories are associated with Tory Island, some legend, others fact, making it an intriguing and colorful place to be. In the center stands a rugged rock turret pointing to the sky, the remains of a 6th century tower used as a look-out against seafaring invaders – fierce Vikings and others.

Celtic legend has it that the illustrious tribe, the Tuatha De Danann, triumphed over the Formorians here. Their leader, Nuada, was killed by the Fomorian King Balor’s poisonous eye, but Balor was himself killed by Lugh, the champion of the Tuatha, who then took over as king.

A Catholic legend tells how three Pagan sisters escaped the island in the form of swans but were turned to stone off the mainland and can now be seen as three rocks in the ocean nearby. Saint Colmcille is also supposed to have set foot on the island and built a monastery as part of his conversion campaign.

The sea around the island is a graveyard of ships, with many wrecked and sunk over the centuries, from the remnants of the fleeing Spanish Armada trying to make their way back home, to warships from the First and Second World Wars.

There is also a “Wishing Stone” on the island, a precipitous flat-topped rock beside the northern cliff-face of Balor’s Fort. Traditionally, a wish is granted to anyone foolhardy enough to step onto the rock, or who succeeds in throwing three stones onto it.

As for a holiday combining a stay at “Teach Sabba” with sea excursions on “The Cricket,” there’s no better testimonial than from the King of Tory himself.

“This is a terrific idea, both dynamic and creative. It allows visitors to really experience island life, enjoy some breath-taking scenery, learn so much about our five-thousand year old history and go off on exciting boating expeditions.”

Portsalon twins with Headforth
Scroll to top
Share This