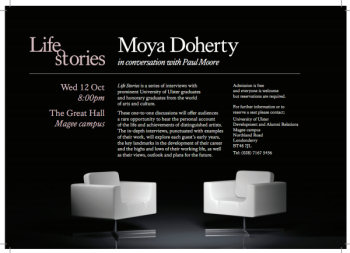 Admission is free and everyone is welcome

Moya Doherty’s career includes theatre, radio and television production and presentation, both in Ireland and internationally. She fronted a number of arts, features and documentary programmes for RTÉ Television and also for TV-AM, the British breakfast television network. She is an award-winning television documentary maker, having won a Jacob’s Award for her work on A Silent Scream. As Executive Producer Moya produced a number of charity telethons, the Eurovision Song Contest and the televising of the opening ceremony of the Special Olympics held in Ireland in 2001.
And here’s a quick reminder…