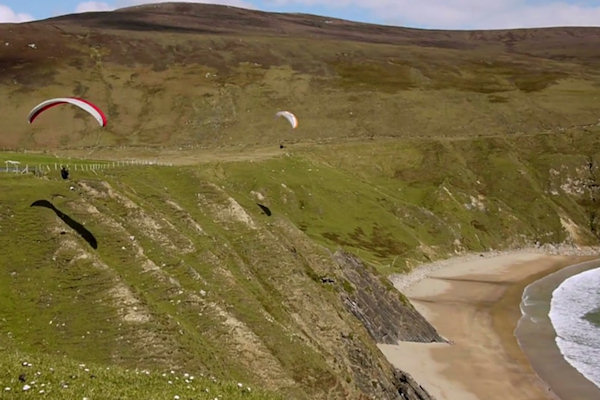 Awesome Paragliding Donegal : The coastline of Glencolmcille is varied and dramatic, embracing as it does huge, sheer cliffs, sea-sculpted rocks and islets, tiny inlets where local fishermen harbour their boats, and sandy, safe beaches. At Malinbeg, with Rathlin o’Beirne Island a mile offshore, marking the Northen entrance to Donegal Bay, we have one of the finest beaches in Ireland, the sandy safe, Silver Strand, while at the North-Eastern extremity of our coast we have Tormore, 482 feet, Ireland’s highest sea stack.

In between and along an indented coast lies Teelin (Malinmore) Head, the most Westerly point on the Donegal coast, with Rossan Point close by at the entrance to Glen Bay. At the head of this bay is a good, sandy beach, backed by dunes, with a Car Park and the Folk Museum Centre adjacent. Glen Head rises to a height of 769 feet and is surmounted by its Watchtower. Just North of here is the Sturral, a jagged, knife-edged promontory.