Donegal town was turned into a tourism exhibition centre for three days as thousands thronged the streets of the historic south Donegal town to sample the delights offered by Donegal Live 2012.

Following on from events in Dublin and Glasgow, the decision to bring the ‘Live’ formula back home proved a resounding success and the remarkable weather over the three days gave the town a continental feel to it.

Open air concerts in The Diamond and a major exhibition area highlighting the best that Donegal has to offer.

Donegal Town Community Chamber in association with Fáilte Ireland, Donegal Tourism and the Donegal Association were selected to host this major tourism promotional event. It took place in Dublin’s Temple Bar, The Iveagh Gardens and Glasgow over the last two years and highlighted all that Donegal has to offer tourists from both home and abroad.

Last weekend Donegal Town has been transformed into a tourism exhibition centre, with live music concerts from national and international bands in the Diamond area. The tented village on the pier houses exhibitors showcasing all that the county has to offer the discerning visitor.

The best of Donegal style was also on display with lots of clothing and jewellery, along with designers, artists and manufacturers of great local crafts.

Siansplan.com was developed after a few years of working with home cooks. The main objective of Siansplan.com is to make it as easy as possible for home cooks to cook healthy meals for their families within the budget that they have. Siansplan.com have created a meal planning in colour web application which means that home cooks can have the right food in the right amount right there in the kitchen when they need it.

Sian Breslin developed the meal planning in colour because she wanted to make it easier and achievable for home cooks to cook as many days in the week as they can. In one week which counts for 5 cooking days there are 4 red days and 1 green day. The four red days are to plan, shop and cook. Only 4 recipes are needed – 1 red meat dish, 1 chicken dish, 1 meatless dish and 1 fish dish. The green day is where all the leftovers are used that are in the store cupboard or fridge- there is no planning involved. The other two days are flexible, where a family can eat out etc.

Siansplan.com is a mother and son business where Sian is the Home Economist expert and Vincent looks after the technological side of the business.

The Countdown is on and preparations are well underway for the Laghey Blast Festival. With only one week to go to the May Bank Holiday Weekend, you will see the village of Laghey come alive for their third annual festival.

Events will kick off on Friday night 4th May with the selection of the Festival Queen. Twelve ladies from Laghey and the surrounding areas will take part in this competition in O’Carolan’s Dew Drop Inn at 9.00p.m..

To celebrate the recent success of Laghey’s Biggest Loser there will be a 5km fun run at 12 noon on Saturday 6th May.

The opening parade is also on Saturday at 1.00p.m. with marching bands, local children and The Big Heads. MC is Gerry Singer.

This year’s festival brings a variety of events and activities to suit everyone’s taste with plenty of fun and entertainment for all the family. Children’s activities include Fun Fair – pay as you go, Bouncy Castles, Children’s Olympics, Teddy Bear’s Picnic, Itchy Feet, this is a free workshop for kids on drumming, Magician show on Sunday at 2.00p.m. and 5.00p.m., Birds of Prey and much more. For the adults, Arts and Craft Market, History Tour, Blast Bake Off – Bakery Competition, Funzone includes Cracker Eating Competition, Musical Chairs for the young and old, Show and Tell with local people showing their skills, Soap Box Darby – Go Cart Racing, Rambling House music, songs, stories and dance for the young at heart.

There will be balls of fun when 1,000 balls are released at the top of Main Street with first ball winning a prize of €200.00. The Ball Race competition is on Sunday at 2.00p.m. and costs only €5.00 each and you have two chances of winning. The Jack Wise Show a crazy street entertainer – sword swallower and hilarious ventriloquist not to be missed.

Saturday night’s entertainment includes original band Mojo GoGo their drummer Jordon Carty who hails from Donegal town and has toured America with Kintra. The band has recently featured on the front cover of Hot Press Magazine and has also secured a record deal in Manchester. Ardara’s singer and songwriter Emily Whelan will take to the stage on Sunday evening at 8.00p.m.

Due to the high calibre of the music acts there will be a charge of €5.00 admission to the live open-air concerts on both Saturday and Sunday nights.

We are committed to bringing you an unrivalled musical entertainment event, but we also know that no festival experience is complete without a host of other entertainment. So, whatever your tastes, the Laghey Blast Festival has got something for you.

Parking restrictions will be in place, please obey the stewards at all times and make this a safe and joyful festival for everyone. Thank you for your co-operation.

Donegal Live 2012 will be held this year in Donegal Town, Co Donegal.

A spectacular three day event in May will feature live open air concerts in The Diamond and a major exhibition area highlighting the best that Donegal has to offer in the the categories below.

Donegal Town Community Chamber in association with Fáilte Ireland, Donegal Tourism and the Donegal Association are proud to have been selected to host this Major Tourism promotional event, which took place in Dublin’s Temple Bar, The Iveagh Gardens and Glasgow over the last two years and which highlighted all that County Donegal has to offer tourists from both home and abroad.

Donegal Town will be transformed into a Tourism exhibition centre, with Live Music Concerts from National and International Bands on the Diamond area. Our tented village on the Pier will house exhibitors showcasing all that the county has to offer the discerning visitor. Looking Forward to seeing you there. 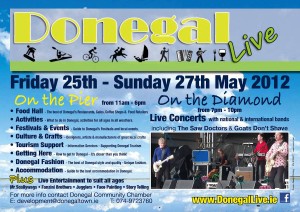