2018 marked the 125 Year anniversary of the Rosapenna Hotel and Golf Resort. Visit once … stay forever 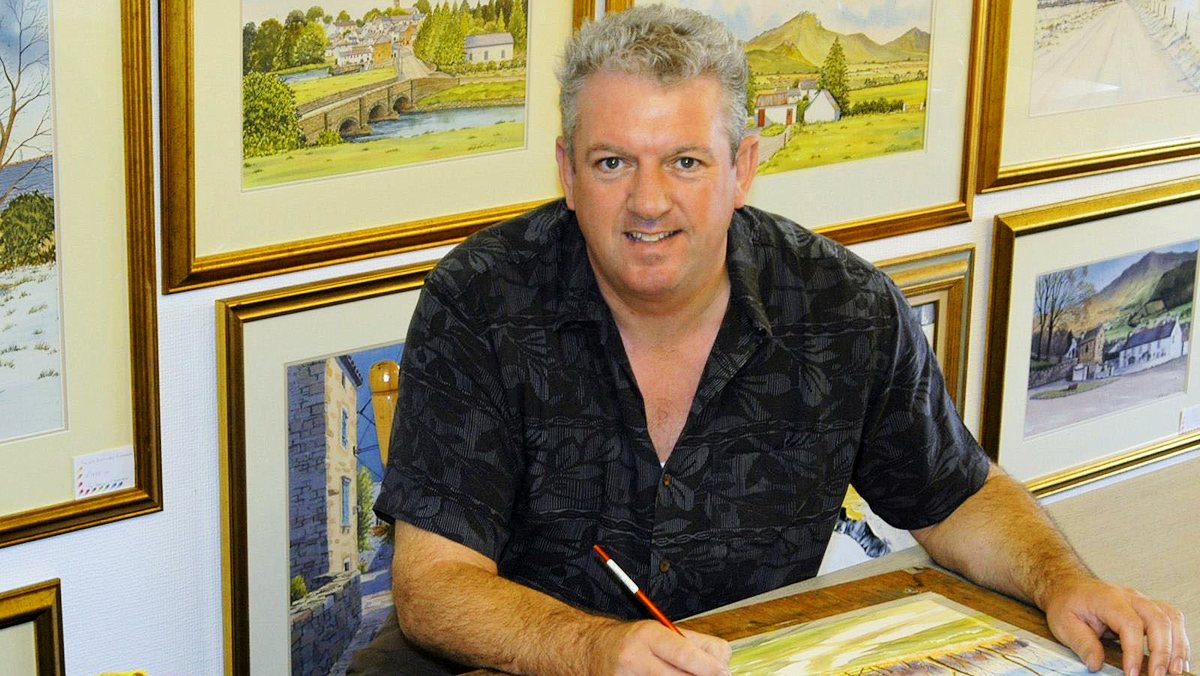 BBC TV Artist Dermot Cavanagh says he can bring out the artist in anyone and to prove it he’s holding a 3 day watercolour workshop on the Atlantic Drive Downings Co. Donegal from 14th to 16th July 2016.

Dermot Cavanagh is the artist and broadcaster behind the BBC series ‘Awash with Colour’. During 74 episodes of his hit art travelogue Dermot informed and inspired millions of TV viewers at home and abroad as he taught a host of celebrities to paint. Pauline McLynn, Packie Bonner, Barry McGuigan, Gloria Hunniford, Suzanne Dando and John Craven to name but a few all took up the paintbrush and joined Dermot on his watercolour exploration of Ireland.

Now Dermot has carefully structured a 3 day art workshop so as to improve painters of all levels of artistic ability, including beginners. He will cover a range of watercolour techniques and exercises that will greatly develop the skills of any enthusiasts. His sessions will be hands-on with each guest creating a step-by-step watercolour to be proud of from the initial sketch to the finishing touches.

3 Day Workshop including all materials: Price £199.00 or €235.00. Pre-booking is essential.
Painting days are 10.00 am to 4.30 pm.
All painting materials are provided so there is no need to bring anything.
Places are strictly limited to allow for lots of individual instruction.
Bookings can be made securely over the phone using Credit or Debit Cards. 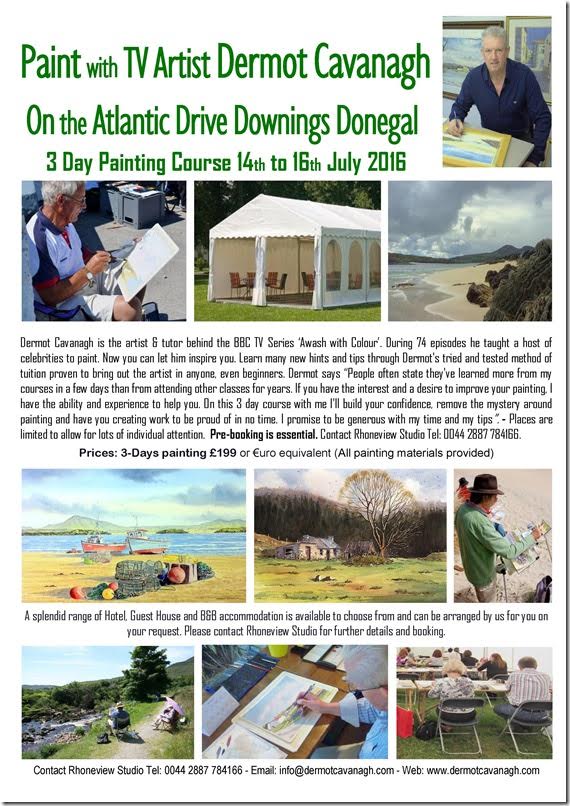 There was good news for the seaside village of Downings with confirmation that its beach has received blue flag status for the first time since 1999.

Downings is one of thirteen Donegal beaches to have been awarded blue flag status after An Taisce announced the International 25th Anniversary Blue Flag Awards for 2012.

The awards were presented by the Minister for the Environment, Community and Local Government, Mr. Phil Hogan, T.D and Mr. Jan Eriksen, President of FEE at an awards ceremony held in The Portmarnock Hotel & Golf Links on Thursday.

Downings Beach gets Blue Flag Status
The full list of blue flag beaches in Donegal is: Bundoran, Murvagh, Rossnowlagh, Naran, Carrickfinn, Killahoey, Marble Hill, Portsalon, Lisfannon, Culdaff, Stroove, Fintra and Downings. In Sligo, two beaches, Enniscrone and Rosses Point, have been awarded blue flags. Mullaghmore is not being awarded the Blue Flag as there is an ongoing issue with livestock roaming on the beach.

Patricia Oliver, An Taisce, speaking at the awards said, “We are delighted in this, the 25th anniversary year of Blue Flag to announce a record 87 Irish Blue Flag sites.

“The continuing high standards of our beaches are testament to the hard work carried out by Local Authorities throughout the year to improve water quality and provide clean, safe beaches for everyone to enjoy.”

Donegal has the potential to be the Blue Flag capital of Ireland with more top internationally recognised beaches than any other county in Ireland.

The county currently has 12 Blue Flag beaches, and lies third in the league table behind Mayo and Kerry, who both have 13.

But Cllr. Liam Blaney believes that Donegal Co. Council should be making every effort to ensure that more beaches in Donegal get the official Blue Flag status.

He pointed out that Rathmullan has a 2 km long beach but had lost its Blue Flag status in 2003, due primarily to problems with water quality. However, the water quality has improved – and has been monitored – and is set to improve further with the completion of the Letterkenny wastewater treatment works at Magherenennan. He added that Rathmullan also has the infrastructure required with toilets, lifeguards, beach management and parking. He contended that there would be little additional cost as water quality samples are already being monitored now.

Downings lost its Blue Flag a number of years ago due to problems on beach with traffic. Prior to this it has been a Blue Flag beach for four years, and he felt that not a lot would be needed to regain that status.

He also felt that Ballyheerin beach in Fanad could also meet the strict criteria.
Speaking at the monthly meeting of Donegal Co. Council in Lifford, Cllr. Blaney tabled a motion calling on the local authority to apply for blue flag status for more of the county’s beaches.
Several other councillors also spoke about the value of the Blue Flag awards and backed Cllr. Blaney’s call.

The Council’s Assistant Director of Water and Environment, Joe Poeples said that there was a marginal cost in “getting some locations over the line” but added that choices need to be made between competing demands.

A report on the matter will be brought back to a Strategic Policy Committee meeting in February.
Cllr. Blaney acknowledged the tight budgetary situation but felt that to have the highest number of blue flags in any county would be a great plus in promoting Donegal.