Derry wins bid to host the All-Ireland fleadh. Members of the central executive of traditional Irish music body Comhaltas met in Dublin to decide the venue on Saturday. 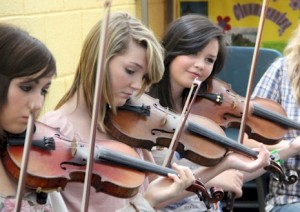 Sligo was also in the running to host the fleadh. Ennis had withdrawn its bid. The festival attracts up to 300,000 visitors and is worth about 40m euros to the host venue.

Comhaltas promotes traditional Irish music and culture around the world.

Derry, which will be UK City of Culture 2013, was a late confirmation on the shortlist after the Ulster Council of CCE reversed its decision not to support the bid.

Donegal earthquake registers 2.2 on Richter scale. The epicentre of the quake is believed to be somewhere close to Glenvar on the Knockalla Coast Road. Residents living in Donegal were woken by a minor earthquake in the early hours of Thursday morning.

The British Geological Survey (BGS) confirmed an earthquake registering 2.2 on the Richter scale was registered in Buncrana at 01:04 GMT. The earthquake’s measured depth was 3km.

It happened almost exactly two years to the day since a similar sized tremor was felt. The BGS said it was a very small reading in terms of world earthquakes but for Ireland, which does not see much of this activity, it is not surprising it has caused an amount of alarm.

It received about nine calls with people claiming to have felt vibrations, whilst others compared it to thunder.

Julian Bukits, assistant seismologist with the BGS, said window frames shook and some people were woken up.

“It happens naturally in the north of Ireland but not as often, say, as northern Scotland or the south of Wales,” he said.

“No one can really explain it for Ireland, it’s just a geological phenomenon. Usually, with reports of this kind, people think it’s a heavy lorry going past their home.”

The BGS has narrowed the epicentre of the quake down to a few hundred yards around the Knockalla Heights coast road, about five miles across Lough Swilly from Buncrana.

People as far away as Letterkenny, Kilmacrennan and Ballybofey reported the rumblings, as well as more locally in Buncrana, Kerrykeel and Urris.

No damage has been reported.

The last similar-sized earthquake in Ireland was a 2.6 in north Clare in May 2010.

Mr Bukits said: “They are not very often and as far as earthquakes go, 2.2 is relatively insignificant.”

There have been eight minor earthquakes recorded in this region of Donegal.

Director of the Irish National Seismic Network Tom Blake said Donegal has some significant fault lines “coming all the way from Scotland”.

He assured that the faults were far removed from any major boundaries and were a normal reaction to the seismicity there.

“From time to time there is a little stress and strain that gets released and that is what we see as these minor tremors,” he said.

And What about the Northern Lights over Inishowen?

It features performances with young traditional musicians and singers (from 7 secondary schools in West Donegal), the VECMEP Donegal Youth Orchestra and some older musicians from the County. Filmed by David Chernick, Otto Schlindwein, Karen Hosty and Brian McVeigh and directed by Jeremy Howard.

Advertise your accommodation. DonegalAccommodation.net is the easiest and most cost-effective way of advertising local accommodation. Simply create a user account and enter the details and photos of your accommodation. Your professionally designed listing will then be visible to 1,000’s of potential customers. We focus exclusively on accommodation in County Donegal ensuring your web search will return relevant local listing.

Eileen and Neil opened The Green Man shop in June 2006 on Dunfanaghy’s Main Street, with the aim of providing local and imported foods which were not readily available in the area. They also decided where possible, to stock organic and fairtrade products. The Green Man is recommended by the Bridgestone Guide.

The Green Man Mobile Delicatessen was set up in May 2010. Neil takes the trailer to local markets and towns. 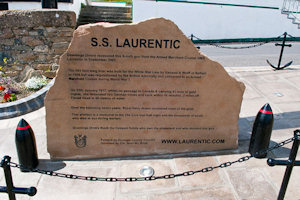 Laurentic Conference Buncrana – A major conference will take place at the end of this month to help the diaspora in the United States and Canada better connect with their roots.

When: Friday, January 27 at the Inishowen Gateway Hotel

Laurentic Conference in Buncrana
To register for the conference
email j.odonnell @visitinishowen.com
ring Jennifer on +353 7493 62600

The third annual Laurentic Conference and Business Beyond Borders seminar will be held on Friday, January 27 at the Inishowen Gateway Hotel in Buncrana, County Donegal.

Guest of honor and speaking at the conference will be the Canadian ambassador to Ireland Loyola Hearn but organizers, the Ulster Newfoundland Initiative have also put together a strong line-up of other speakers who will address attendees.

A number of local businesses will take part in the event with various stalls and displays at the conference.

All funds raised from this event go towards our ongoing mission of forging and fostering Educational, Economical and Cultural links with Atlantic Canada and the development of our planed youth project.

Our Annual Laurentic Wreath Ceremony to take place on Saturday January 28th at 2:00pm at St Mura’s Church of Ireland in Fahan and 3:00pm at Cockhill Cemetery Buncrana All Welcome

Click here to find out more about the SS Laurentic – The Gold Bullion Ship.

Register For The Laurentic Conference

To register for the conference
email j.odonnell @visitinishowen.com
or
ring Jennifer on +353 7493 62600

A workshop “Diaspora an economic resource for Donegal” will take place on Wednesday, February 8 between 9.30am and 12.30am at the Radisson Hotel in Letterkenny.

The workshop will be given by Kinsley Aikins, former CEO of the Ireland Funds Worldwide. The Workshop will examine benefits and good practice with regard to harnessing diaspora as a resource and will focus on the potential of this sector for this region.

Diaspora an economic resource for Donegal

Another interesting aspect to the project is to consider how to best display our county to the families of those who have settled here over the past decades.

“Think about all the new people who have come to Donegal in the last decade from Africa, Poland. Chile and other countries. How do we inform their families in their homelands about the place that they are living in?”

Paramotoring over Burnfoot Donegal – This is Eddie paramotoring around Burnfoot in Inishowen, Donegal with the new Hero GoPro 2 HD Helmet Cam. The paramotor is the EC 25 extreme with a 185 Moster engine and paramotoring wing is the great K2 from Sky.

Guilty of Rhythm – The Show

This awesome. Followed the link from the fender forums and I gotta say, I can certainly here some great fender tones in their 😉 keep rockin and developing that﻿ sound of yours. I think you guys really got something going here.
Patcha1993